The Political Mind: A Cognitive Scientist's Guide to Your Brain and Its Politics (Paperback) 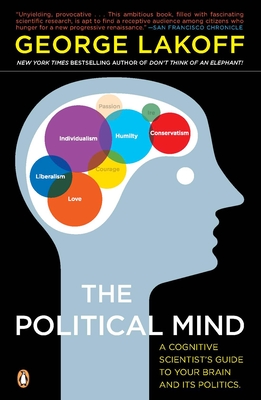 One of the world 's best-known linguists and cognitive scientists, George Lakoff has a knack for making science make sense for general readers. In his new book, Lakoff spells out what cognitive science has discovered about reason, and reveals that human reason is far more interesting than we thought it was. Reason is physical, mostly unconscious, metaphorical, emotion-laden, and tied to empathy-and there are biological explanations behind our moral and political thought processes. His call for a New Enlightenment is a bold and striking challenge to the cherished beliefs not only of philosophers, but of pundits, pollsters, and political leaders. The Political Mind is a passionate, erudite, and groundbreaking book that will appeal to anyone interested in how the mind works and how we function socially and politically.

George Lakoff is the Richard and Rhoda Goldman Distinguished Professor of Cognitive Science and Linguistics at the University of California, Berkeley, where he has taught since 1972. He previously taught at Harvard and the University of Michigan. He graduated from MIT in 1962 (in mathematics and literature) and received his PhD in linguistics from Indiana University in 1966. He is the author of the New York Times bestseller Don't Think of an Elephant!, among other works, and is America's leading expert on the framing of political ideas.