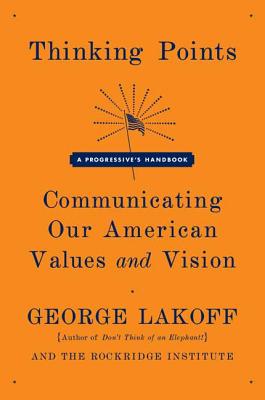 Two years ago George Lakoff published the bestselling Don't Think of an Elephant! Its account of the conservative monopoly on effective framing touched off a national discussion about political language. It also gave rise to a chorus of pleas for more:

* What is the progressive vision of America;
* Why progressive values are America's values;
* How frames are necessary to serve the truth;
* Why sloganeering alone doesn't work;
* How progressives trap themselves and how they can escape those traps; and
* How political arguments and narratives can be put together to counter the Right.

Thinking Points satisfies that call with a bold, concise, and systematic explanation of how conservatives think and use language—and how progressives can fight back . Lakoff and the Rockridge Institute offer a new understanding of the so-called political center and explain why the most effective way to appeal to those who identify themselves as moderates or conservatives is to remain true to progressive values.

This book is essential reading for anyone who wants to participate in shaping an America that serves the common good.

George Lakoff is the author of Don't Think of an Elephant and Moral Politics, as well as many seminal books on linguistics. He lives and teaches in Berkeley, California.

“Thinking Points is a must read for anyone who doesn't want speaking out to become a dying art.” —Arianna Huffington

“In Thinking Points, George Lakoff and the Rockridge Institute show how Progressives can stop appealing to some hypothetical "middle" and instead appeal to the deep morality that the vast majority of Americans share. When we speak from our hearts, the integrity of this will speak broadly.” —Joan Blades, MoveOn

“In an environment too often dominated by sound-bite arguments and political polarization, Thinking Points is more than a communications tool; it is a must-read for progressives as well as non-partisan activist organizations like the ACLU that want to trumpet their values not only loudly, but effectively. Professor Lakoff's expertise has been invaluable in articulating the ACLU's core values-fundamentally American values-to a broad and politically-diverse audience.” —Anthony D. Romero, Executive Director, American Civil Liberties Union

“This book is essential reading for anyone who wants to speak out effectively about progressive, American values.” —Eli Pariser, Executive Director, MoveOn.org Political Action